I recently presented at the International Medieval Congress (#IMC2015) at the University of Leeds in a session entitled “The Twitterati: Using Twitter in Medieval Studies Scholarship and Pedagogy.” It was a quick moving jaunt through the different ways that academics incorporate Twitter into their lives – through teaching, activism, community, and research. The panel also included Dorothy Kim, Jonathan Hsy, Heide Estes, and Angie Bennett Segler; it was organized and moderated by Carla María Thomas. We were delighted to have a responsive audience that kept the questions and discussion going half an hour after the session ended, and our session hashtag (#s1403) briefly trended #6 on UK Twitter (now that’s meta).

My part of the session was to share some of the research I am doing into how medieval studies scholars use Twitter at large academic conferences. I archived tweets from both the International Medieval Congress at University of Leeds and the International Congress on Medieval Studies at Western Michigan University in Kalamazoo in 2014 [#imc2014 and #kzoo2014]. These two conferences are the largest medieval studies conferences in the world and bring together scholars from many disciplines and stages of their careers.

In my talk, I wanted to show:

Together, participants at the conferences tweeted 11,264 times.

An important caveat to the information below is that the data I collected ONLY included tweets that included the official hashtag. This means that conversations stemming from officially hashtagged tweets were often missed as they rarely continue to include the conference tag. If conference Twitter is like a digital main street, then let’s consider those side conversations key, but taking place on side streets, and (unfortunately) not captured here.

The differences in tweeting totals between the two conferences can be understood in the context of the conference sizes. Kalamazoo was roughly 33% larger than Leeds in 2014.

Beyond retweeting patterns, another piece of evidence that medievalists behave similarly across these conferences is the percentage of conference attendees who Tweeted, which was about 30% at each conference.

Those tweeting, of course, were not only face to face conference attendees. Some people were participating from afar; some were supporting a fellow medievalist by retweeting them once but not otherwise engaging with the conference. The information below is a *rough* sketch of conference participation in the Twitter backchannel. Nevertheless, it gives us a window into how widespread the practice is. 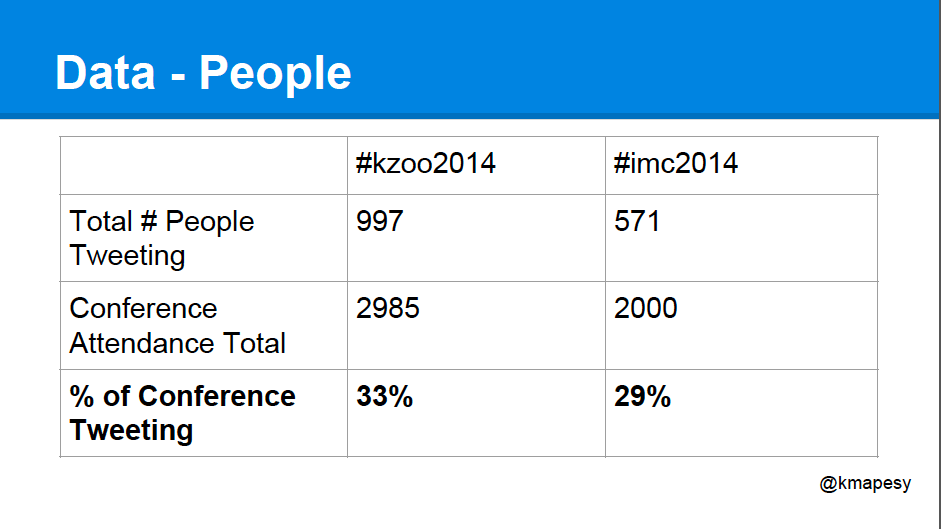 While there were quite a number of people tweeting at each conference, it is important to note that most (59%) only tweet once using the hashtag. By contrast, folks like my fellow panelists (Jonathan Hsy and Dorothy Kim, for example) who tweet more than 100 times per conference constitute only 1.3% of all tweeters. A full quarter of people who tweeted did so between 2-5 times during the conference. 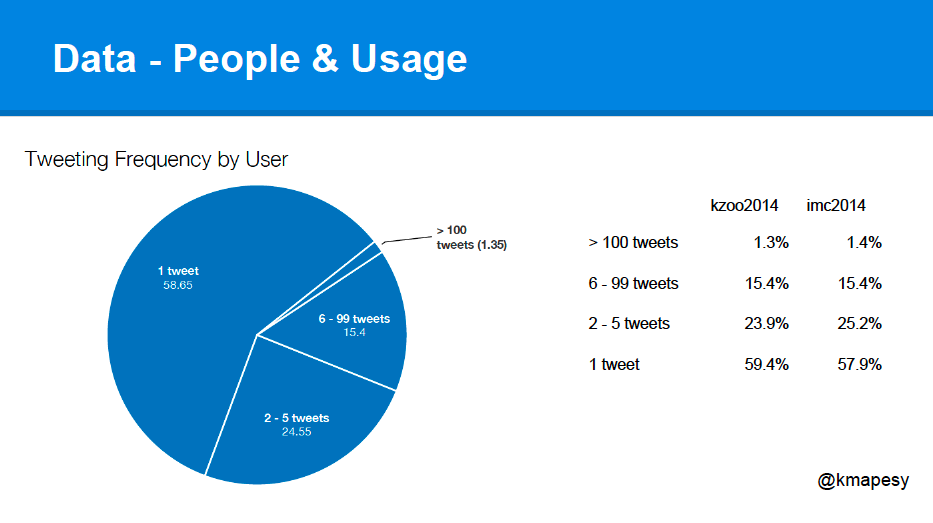 So what does this mean?

The second part of the talk very briefly went over the 10 categories of tweets that I encountered. They are as follows:

The results of hand coding the tweets with these categories can be seen in the bar chart below. The two conferences showed very similar behavior regarding categories, so again the data has been combined. These numbers show that BY FAR the most common activity using the conference hashtag is note-taking at 44% of the tweets. 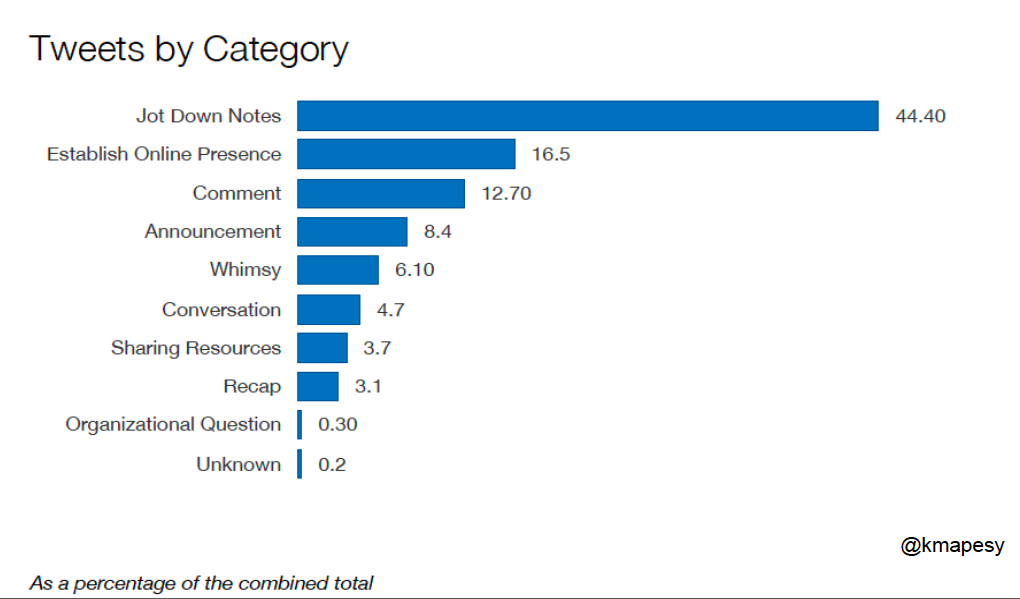 In case anyone was worried that lots of tweeting sessions involves scathing commentary — this is not the case. The commentary I encountered (12.7% of all tweets) was almost universally positive. It may be that negative commentary makes its way to twitter as subtweeting, not using the conference hashtag so the commentator can vent/criticize without anyone noticing. In the official conference feed, by contrast, there were strands of support for a speaker who received an unfair or overly critical question, whether from Twitter or in person.

I did not have a chance to explore the differences in categories between Leeds and Kalamazoo due to time. The behavior was similar across the two, but there were some differences. 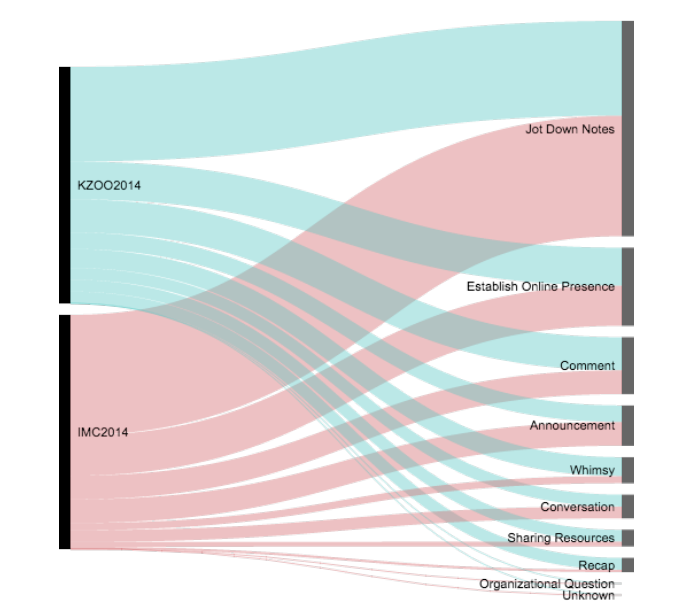 What does this data tell us about how academics use Twitter at large medieval studies conferences?

In the question period at the end of the session, there were a couple of questions relating to assumptions that in order to be a “good” Twitter academic one should behave in one way or another.

One concern was that tweeting at a conference implied a user needs to be a regular Twitter user, and that keeping up with posting regularly would be a barrier to conference participation. In reality, there are many people who either only tweet at conferences or do most of their tweeting a conferences. All of the session panelists agree that our twitter use and participation ebb and flow over time – and that’s entirely normal.

Another question voiced a concern that since conference presentations are often works in progress, that Tweeting them made it seem that the work was publishable material. For a speaker who is presenting work they are uncomfortable having tweeted, it is important to remember that you have the right to ask the audience NOT to tweet. See Dorothy Kim’s #medievaltwitter rules for further etiquette recommendations.

My purpose in collecting, analyzing, and presenting this data is to show that, aside from being respectful, there isn’t any one way to behave at a conference. Just because 44% of conference tweets are notes does not mean you must livetweet a session. If you livetweet one session or one paper in a session but don’t feel like it 15 minutes later, it’s ok – just take a break. If you enjoy following conference book sale announcements but don’t want anything to do with #medievaldonut, that’s fine too. If you just want to see cat pictures and find out which bars are giving out samples of medieval beer, that’s also just fine. Carla, Dorothy, and all of the panelists agree: be yourself on Twitter.